Our aim to provide the highest quality coaching in both Sport and Traditional karate.

At Kokusai we aim to make our classes fun, with an emphasis on enjoyment and participation. We want children to gain a positive experience from karate training.

Grading's are structured to give children a goal to aim for, these are held four times a year. The sense of achievement gained by the students as they advance through the system helps build self confidence and  self discipline, as well as the Physical benefits of strength, flexibility, stamina and co-ordination

We encourage all club members to participate in sport karate, Kata (forms) and Kumite (sparring) with the emphasis on  effort and enjoyment.

We hope that our website will give you all the information you require about our club and answer any questions you may have. 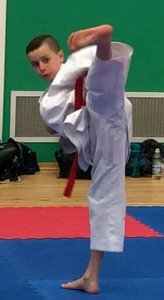